Assalamualaikum and a very good morning..

It has been quiet a long time that I did not update anything. kind of busy with student's life, i guess.

by they way, i just want to let you know that currently i am a forth year student of accounting. so this is my final year and on the early February next year, we will be having our industrial training where it is compulsory for accounting students to have 6 months training while students from another courses just to make it within 4 to 5 months.

i just want to share my experience where at first, i am having dilemma about where should i go for my industrial training. Is it big 4 company ? EY? KPMG? Deloitte? or even PWc?
or should i seek opportunity from  small or middle audit firm ?.. I AM REALLY IN DILEMMA.. uhuh T_T

after all, i tried to go for big 4 where i have to fill up all the documents in the forms given via online in their websites, and i have to scan all my certificates. at last, i end up not submitting all the required information and try to find for other opportunities. (don't be like me, if you really want to go for big 4, then just follow all the requirements and procedures, okayy?) when there is a will, there is a way!

i also try to apply at Bursa Malaysia where it also urges me to fill up the form online..
i guess, i am a little bit lazy.. aigoo =_='

i still do not stop. i keep on searching for any other audit firms in Google where it brings me to a website that has listed all the top 10 audit firm in Malaysia. Instead of Big 4, there are other 6 audit firm that is very well known in Malaysia.

Just to give you a clear picture, this is what i have found :

Also part of the Big Four auditing firms is Deloitte Touche Tohmatsu Limited, more commonly known as Deloitte. As the second largest professional services network in the work, Deloitte provides audit, tax, consulting, enterprise risk and financial advisory services. The firm employs some 182,000 employees that are spread across 150 countries. Deloitte KassimChan and its affiliates provide these services in Malaysia and is part of Deloitte Southeast Asia Ltd.Deloitte Southeast Asia was established to cater to the demands of the increasingly intro-regional and fast growing companies and enterprises.

The fourth accounting firm to make the Big Four is Ernst & Young and was founded in the 19th century. Its headquarters is now located in London and has 695 member firms in more than 140 countries across the world. The services it provides include assurance, advisory, tax and transaction advisory
services.

PwC or PricewaterhouseCoopers as it was previously known is the world’s largest audit and accountancy firm and one of the Big Four auditors. Headquartered in London, PwC spans over 771 cities in 158 countries including Malaysia and boasts a strong body of more than 169,000 people supporting its operations.PwC began its operations in Malaysia (then Malaya) as early as 1900 and since then it has been supporting large MNCs, public sector entities and Malaysian companies by delivering solutions to them through its assurance, tax and advisory services.

One of the Big Four auditors, KPMG’s global headquarters is situated in the Netherlands. The audit firm employs some 140,000 people in its member firms scattered across the globe. The Malaysian arm of the KPMG network of firms is KPMG DesaMegat& Co. It was established in 1983 and now has 66 partners and more than 1,600 staff in 10 offices.

The fifth largest accountancy network in the world, BDO International was founded in 1963 as the Binder Seidman International Group through a convergence of firms form the UK, Netherlands, Germany, the US and Canada. Then in 1973, the abbreviation BDO which stands for Binder DjikerOtte& Co was adopted.Since then, the firm has grown tremendously and now serves clients in 135 countries with almost 48,800 people working out of its 1,118 offices.

A global professional services network, Grant Thornton International and its member firms operate in 521 cities in more than 113 countries across the world. Its Malaysian arm SJ Grant Thornton was established in 1974 and has four offices with the main office situated in Kuala Lumpur. Its other offices are situated in Kuantan, Johor Bahru and Penang. It has 13 partners, directors and principals and more than 250 personnel supporting its operations.

Crowe Horwarth International was founded in 1907 and is ranked among the top 10 accounting firms in the world providing audit, tax, advisory, risk and performance services. It boasts personnel of 2,500 and has 150 independent accounting and management consulting firms that have offices that are spread out in over 580 offices across the globe.

Baker Tilly is ranked the eighth largest accountancy and business service network and has 572 offices which employ more than 26,000 staff in 114 countries. An independent member-firm of Baker Tilly International, Baker Tilly MonteiroHeng is Malaysia’s second largest mid-tier accounting firm with local offices in Kuala Lumpur, Penang, Melaka, Seremban and BatuPahat as well as a branch office in Cambodia.

Halim & Lee was established in 1983 and is a firm of chartered accountants providing accounting, payroll, insolvency, advisory, tax, auditing and corporate services. Situated in Damansara, the firm is helmed by its two partners – Kevin Lee Chew Yam and Hasan bin Husin.

DFK International is ranked among the top 10 accounting firms and business advisors and has been offering its services to the public for more than 50 years. DFK has 202 member firms and 308 offices worldwide with its headquarters situated in London. It has a total of 1,179 partners and more than 10,040 staff in its offices across the world. In Malaysia, the independent member of DFK International is Folks DFK & Co.

so, after making some research. I personally has called the other 6 audit firm asking for the method of applying internship whether they prefer by email or by letter.  I also asked about is there any vacancy for internship in the firm.

well, frankly speaking.. at first i am really scared and terrified to call those companies. It feels like an adult while i am still teenager.. heh =_='.. sounds childish then. but at last, i managed to call and be processional while speaking and interacting with the staff via phone call. Now, i know that they are not monsters and they won't eat me if I ask questions. lol

oh.. for your information, in the email, you should attach your cover letter as well as your curriculum vitae (CV).. well, the cv should be compact and precise and 2-3 pages will be enough. If you kind of having a lot of activities and participation that you have involved in university, you can just explain about the most significant contribution and experience that you have. you may be asked further about it during the interview session..

there are some firms or even companies that will be conducting interview to shortlist the applicants for the internship. when you are being called for an interview, it means that your cv has meet the requirement and standards of the companies.

what matters now is that they want to look at you in personal, the way you bring yourself, either you are scared or you are very enthusiasm to join the company? they will look at your communication skills and also may ask you about the general knowledge too. (then, you should start prepare and read a lot from now) reading books is not  a crime, dude! .. you also need to find out about the company is really doing at the moment, so at least it will give you some ideas about the job scope and what you will be doing in the company.

after all the effort that i have done plus the most important thing, the help by Almighty..
finally, i got a phone call by HR officer from a company, who is arranging the interview for me. 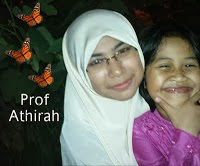 i found this picture after 'googling' my own name.
ohoi~
i used to be very certain that someday i will end up being a lecturer.
now. not anymore.
i think it is better for me to experience the industrial environment first
i am also have many opportunities to get involved in other field as well like being charted accountants, auditor, tax agent or up to the extent i could be CEO or CFO for a company.
if it still did not suits with me, then i should restructure my plan
further study maybe ?
OZ ? NZ ? UK? Malaysia??

may Allah ease this path.
bismillah.

Nurul Athirah
I believe that every entity is the star of their own story. Why not shining bright like a star? Even it took millions of years for a star to glitter and shine as today, but with no doubt it is totally amazing. So, this is the story of mine, which i give it a name, my crystal. How yours?